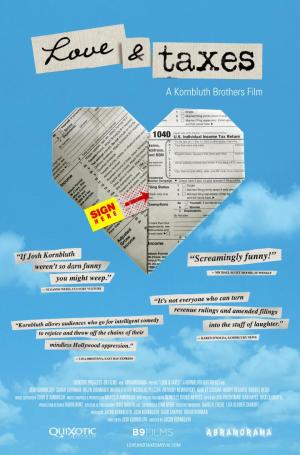 Love & Taxes is a riveting comic tale of seven years of tax avoidance. Following the possibly real-life exploits of Josh Kornbluth, an autobiographical monologist, Love & Taxes is a comedy that blends solo performance and scripted scenes to bring the subjective reality of the storyteller hilariously to life.

Despite working for a high-powered tax attorney, Josh hasn’t filed his taxes in seven years. Josh had what he recalls as a blissful childhood with his radical parents, living “outside the system,” and he has been clinging to that fringe identity for his whole life. But when his boss persuades him to join the system, almost mystically things start going well for Josh. His performing career takes off, his solo shows are “optioned” by major Hollywood studios, he and his brother Jake (Jacob Kornbluth, Inequality for All, Sundance 2013) decide to make movies together – and he meets the woman of his dreams, Sara.

But while Sara wants Josh to join society and take care of his debts, Josh isn’t paying attention to his finances. He and his brother Jake are busy trying to get Haiku Tunnel (Sundance 2001) into the Sundance Film Festival, and Josh has fallen for the manipulations of an unscrupulous tax lawyer, who now might own the rights to their film. Josh soon finds himself broke: his tax-avoidance problems have ballooned into a tax nightmare that threatens all of the great new things in his life.

Love & Taxes is a middle-aged coming-of-age story -- a tale showing that even those on the fringes of our political and economic system long to become providers. It is also, quite possibly, the first ever pro-tax romantic comedy. Above all, Love & Taxes is the perfect comedy for our troubled political times.

"Love & Taxes" is an odd little title for an odd little movie, and yet it delivers exactly what it promises. And in an entertaining way.

Watching "Love & Taxes," you feel as if you're witnessing a life presented without much filter. It's Kornbluth's willingness to revel in what a screw-up he is that carries you along.