An evening with ANA POPOVIC 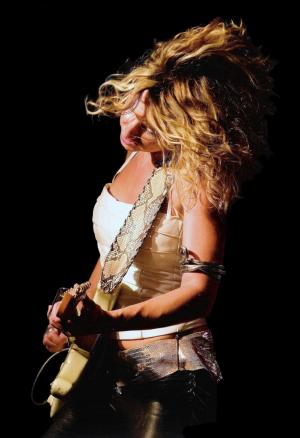 “An evening with ANA POPOVIC”

Ana Popovic, award winning, hard touring guitar slinger blends smoking electric funk and slide guitar, jazzy instrumentals and a tight blues groove with soulful, feminine vocals. Add to the mix her incredible stage presence, all of which makes her an irresistible force in the world of contemporary blues music.

During 2013, Ana has appeared on the cover of Vintage Guitar, Guitar Player’s Gear Guide and American Blues Scene. Her album ‘Can You Stand the Heat’ was a pick of the week by USA Today and featured on NPR Music. Nearly all of Ana’s albums have made it into the Top 5 on Billboard’s Blues Charts and are being played regularly on US radio.

Ana Popovic was born in Belgrade (formerly Yugoslavia). She grew up in a warm and loving family where music was very important. All throughout her youth, her father would invite friends over for nightly jam sessions. In this atmosphere, she quickly learned her father’s impressive blues and soul record collection, grabbed his guitar and started playing at age fifteen. Since then, Ana has developed into a phenomenal guitarist/vocalist with a growing legion of fans throughout the World.

Ana and her amazing four piece band are relentlessly touring, playing major blues, jazz and rock festivals around the World. Twice, she has headlined the award winning Mount Baker R&B Festival and will probably return in 2015.

She is also endorsed by Fender, Mesa Boogie, Ovation and DR strings. Ana has shared the stage with B.B. King, Buddy Guy, Robert Cray, Robert Randolph, Johnny Lang, Sonny Landreth and many others. When not on tour, Ana resides in Memphis Tennessee.

Visit www.anapopovic.com for the rest of the story and a more in depth picture of this amazing Blues Woman.