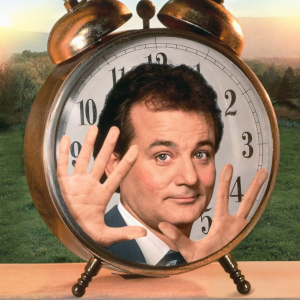 Celebrate Groundhog Day at the Lincoln -- by watching Groundhog Day with us! Never seen it? It's a comedy classic. Seen it already? It's time to watch it again.

Cynical TV weatherman Phil Connors (Bill Murray) is out to cover the annual emergence of the groundhog from its hole in Punxsutawney, Pennsylvania. When gets caught in a blizzard that he didn't predict and finds himself trapped in a time warp, he finds himself doomed to relive the same day over and over again.

Is there a way to escape the endless loop of Groundhog Day? Must he win the heart of his producer, Rita Hanson (Andie MacDowell), to triumph? Luckily, Phil has thousands of chances to get it right!

"What amazes me about the movie is that Murray and Ramis get away with it." —Roger Ebert, The Great Movies

"This is without doubt the wittiest Bill Murray film ever." —Robert W. Butler, Kansas City Star