The Lincoln Theatre's Ghost Light illuminating our friendly spirits' mischief during the COVID-19 Pandemic in 2020/21!

As with all theaters, our ghost light has a dual purpose. The small, single bulb lights our stage just enough to keep anyone walking through the Lincoln at night or in the early morning hours from falling. Dark stages have so many hidden places, draperies, bumps, and holes. And, according to theater history and superstition, the light draws our ghostly performers in, lighting the stage for their recitals and dances and preventing them from making mischief in the dark. Through research and discussions, most spirits in theaters are not malicious. If you think about it, a theater is a happy place and we need to keep our resident spirits happy!

Here's a brief history of the founding ghosts of the LIncoln Theatre. 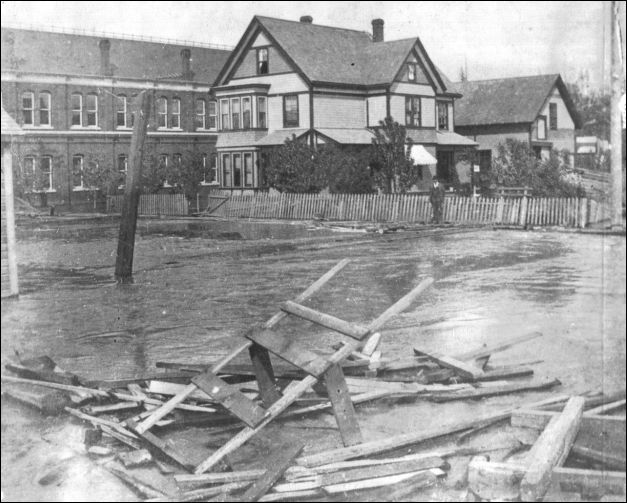 Capt. David F. Decatur arrived at the Mount Vernon steamboat dock in December 1887 after a long train journey from Boston over an unrecorded rail line. He soon became one of the most important town settlers before the 1891 fire and built the first sawmill in town. If you have ever attended a movie or event at the Lincoln Theatre, you have sat almost exactly where his house stood. Decatur bought a homestead on the block east of First street between Kincaid and Pine for his home site. Decatur's fine two-story home was set back on the block where the Lincoln Theater stands today. His spectacular cherry tree was a longtime landmark until it was cut before the theater was built in 1926.

This is a photo of Decatur's home, where the Lincoln Theater stands today, and the new courthouse building behind it. You can see the flood damage on First Street in front of the house. We are looking northeast. We know that the photo was taken after 1893 when the first county courthouse was erected. At some unknown later date, the courthouse became known as the Matheson building, maybe when the upper story was dismantled, resulting in the building that still stands today at the southeast corner of Pine and First Streets.

David Decatur with grandson Elden D. Pollock, who would later manage the Lincoln, in the midst of row crops on his farm south of Kincaid Street where Red Apple and Bank of America stand today. Decatur's house and barn are behind them across Kincaid and the courthouse is in the background. Since Elden looks to be about six, the photo must have been taken in about 1906. 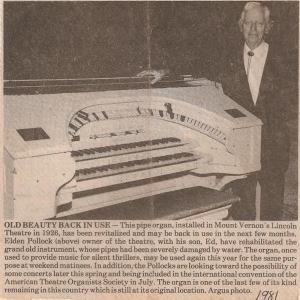 Elden W. Pollock, Capt. Decatur's son-in-law, later developed part of the Decatur family home site in Mount Vernon, building the Lincoln Theatre and the half-block of surrounding storefronts in 1926. The Lincoln block properties went to Elden W.’s wife, Alice Decatur Pollock, after her parents died, then to her sons Elden D., Robert, and David Pollock after her death. Elden D. was married in Mount Vernon on July 17, 1930. He had visited his grandparents in Mount Vernon on many occasions, but he lived in Seattle and did not move to nor live in Mount Vernon until 1932.  "I was born in Seattle but moved to Mount Vernon shortly thereafter when my parents, Elden D. and Mary moved our family to Mount Vernon to 'temporarily' manage the Lincoln, as the tenant (Edward H Halberg and Ives Theatres, Inc.) had grown sadly delinquent in paying rent” (Son, John Pollock).

Elden D. and his brothers, Robert and David, became co-owners of the property, and Elden (pictured here with our Mighty Wurlitzer) acted as reluctant manager of the theater for the next 65 years. At one point, possibly after his divorce to his second wife Margaret, or after losing money from some bad investments (according to son Donald Pollock), Elden D. lived in the tiny attic adjacent to the stage. Elden’s loft, as we call it today, is accessed by a drop-down ladder in the backstage crossover, and stands as a reminder of harder times. Elden D.s children, John, Donald, and Edward spent their early childhood years at the Lincoln. The youngest brother, Edward Pollock who suffered from Marfan syndrome or a similar disordermanaged the other family properties on the block and worked to help restore the mighty Wurlitzer that had fallen to disrepair since “talking pictures” in the late 1920’s made the mighty instrument obsolete. The people who remember him always talk about his enormous hands. "Big enough to hold a basketball". According to John Pollock, "Ed Pollock, who was managing the building which included the Lincoln Theatre, but not the theatre itself, died suddenly in 1985 at age 36 on the street in front of the theatre as he was leaving for the day. The theatre itself had been operated in recent years by various tenants, and was not infrequently on the brink of closure. The theatre and the surrounding shops were owned, and sold a few years later, by Elden D., Robert and David Pollock to the Pickett family in the early 1980s and the theater foundation was formed in 1987 to provide a community financial base for restoration of the property. 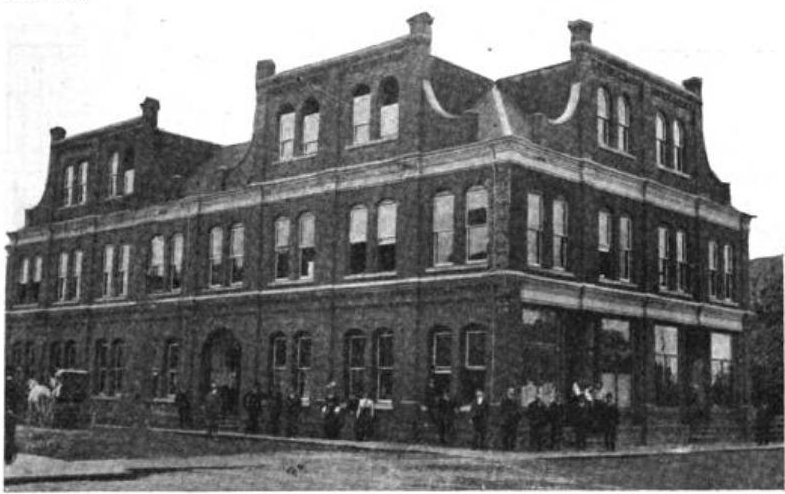 Skagit County Courthouse circa 1907 (now the Matheson Building) before the upper story was removed and the Lincoln Theatre was constructed borders the south side of Pine Square. The Former Skagit County Courthouse housed the jail, and country offices until 1922. The tiny concealed open-air prisoner “exercise" area (and reportedly where hangings were preformed) is located in-between the Matheson Building and the Lincoln Theatre and is still a visible memorial of the jailhouse adjacent to the Lincoln's alley door.

Proper credit must be given to David Decatur's family for its role in this fine theater's long history. The Lincoln is the last remaining theater in Skagit County from that glorious time before the Crash of 1929 when impresarios built grand palaces that recreated that social gathering that dated back to the beginning of time: families and tribes huddling together to watch flickering shadows on a wall. Ghosts from another era? "It is not often that a modern ghost displays moral qualities which can be honestly approved. As a class ghosts are idle, frivolous, meddlesome, and apparently wholly devoid of moral sense." * The ghosts that walk the stage and halls of the Lincoln can only be described as benevolent.

Many thanks to Noel V. Bourasaw, Skagit River Journal ©2003, and to Donald and John Pollack for most of the information on this page. Many of the photos on this page are from the collection of the late Roger Fox, were scanned and loaned by Larry and Josef Kunzler, from their www.skagitriverhistory.com website, which features dozens of old photos, especially those from Skagit floods, the main subject of their website, and grandson John Pollock.