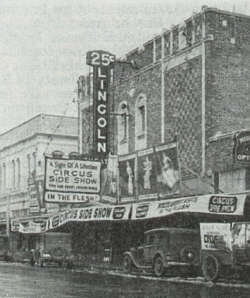 The Lincoln Theatre Center Foundation, founded in 1987, is a registered 501(c)(3) nonprofit organization supported by over 800 members from Skagit and adjoining counties. 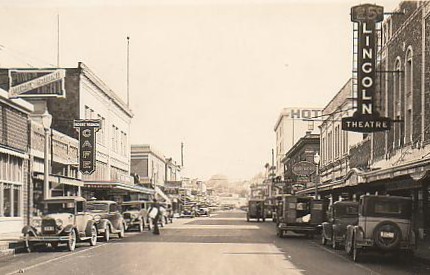 When the Lincoln Theatre was built, it was hailed for its originality and beauty. The original owner, Elden Weigel (E. W.) Pollock, enlisted noted Seattle architect William Aitken to design the Lincoln in a modified Renaissance Revival style. The Lincoln Theatre officially opened on April 21, 1926 to rave reviews. The Argus newspaper reported on May 13, 1926, "Nothing like it has ever been constructed before...the theatrical world is sitting back astounded."

The Lincoln is a "period theater," meant to evoke a specific era; such theatres were in vogue at the time it was built. Some theaters built in the twenties had an Egyptian motif, and some (such as Seattle's 5th Avenue Theatre) had a Chinese motif, but the Lincoln was a little different for the Northwest: it sported a Spanish motif. Manager Edwin Halberg, Pollock's business partner, ignored the pleas of his friends that he follow the crowd and invest in an Egyptian theme -- he foresaw a time when movie fans would tire of such a motif, and chose instead the Spanish design.

Halberg personally designed the luxurious carpet, the decorative effect on the walls, the hangings and draperies, and the lighting effects, with substantial use of primary colors blue, yellow, and red. The foyer was lit with quaint, wrought-iron lanterns with Spanish design patterns, and the walls decorated with a rustic travertine finish.

About a year after the theatre opened, the silent film era began to give way to the "talkies." Many classic films opened at the Lincoln during the years, including Al Jolson's groundbreaking 1927 hit The Jazz Singer, and, in the following decade, the enormously popular films of Shirley Temple.

During the 1930s, the theatre was a popular stop on the West Coast vaudeville circuit. Traveling stage shows often stopped over in Mount Vernon en route from Seattle to Vancouver, British Columbia, a tradition that continues today. Many of those performers signed their names and wrote other comments on the plain wooden door to the tiny backstage dressing room on stage right, another ongoing tradition. The souvenir door eventually found its way to a more palatial dressing room downstairs. 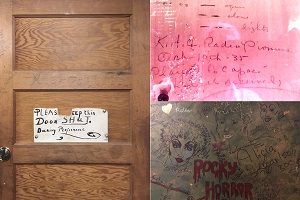 By 1980 the Lincoln closed its doors and there was talk of tearing it down. As a final measure, the owner asked a group of arts-minded citizens to look it over and see if it should or could be saved. These enlightened people didn't just see the tattered and neglected interior, the stripped-out light fixtures, the moth-eaten curtains, the broken-down seats, and the musty, dirty lobby. They saw the bones of a once-beautiful jewel. They formed a group of people to clean the theatre up, restore what could be restored, find the lost and sold-off fixtures, and repair and replace what they could. From this group, the Lincoln Theatre Center Foundation was organized in 1987 as a nonprofit, tax exempt corporation.

The City of Mount Vernon, spearheaded by Mayor Sky Richendrfer, purchased the Lincoln Theatre building in 2001, with an agreement that the Lincoln Theatre Center Foundation maintains and operates the Theatre. At the heart of these restoration initiatives was a community of people -- individuals who came together to recreate something very special.

Of the theatres built in the United States during the 1920s and the 1930s, fewer than 10% still exist today. The Lincoln is one of the few fully functioning historic theatres, thanks to a community that came together and made it happen.

In the '90s and early 2000s the Theatre undertook major renovation projects to restore and renovate the theatre, recreating the former glory of the theatre and creating an important cultural resource for the community.

As part of the Lincoln Theatre's Renovation Campaign, the Lincoln's facade was rehabilitated, including the construction of a free-standing tickect booth and marquee in 2002. In 2005, the Lighting Improvement Project was completed, concentrating largely on the auditorium.

In 2013, the Lincoln Theatre Center Foundation held a very successful "Digital Futures Initiative" for the transition to digital projection as mandated by the motion picture industry. It allowed the Lincoln to continue to screen first run, arthouse, and independent films as it has for decades. Our 35mm film projectors remain in the booth and at-the-ready to screen archived 35mm film prints whenever possible.

Above: The Lincoln's beautiful auditorium, courtesy of Damien Vines, 2012 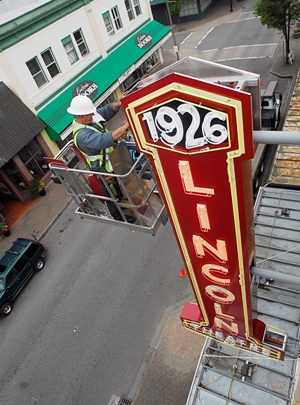 Above: Brett Milton, of Meyer Sign and Advertising Company, in May of 2011, putting on the final touches to our replicated blade sign, the original of which was destroyed in the 1980s. 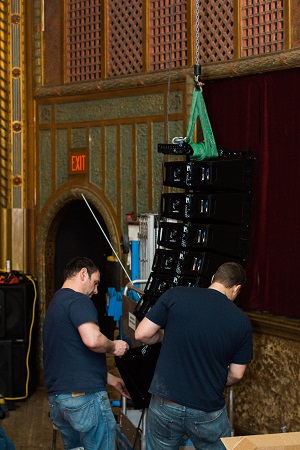 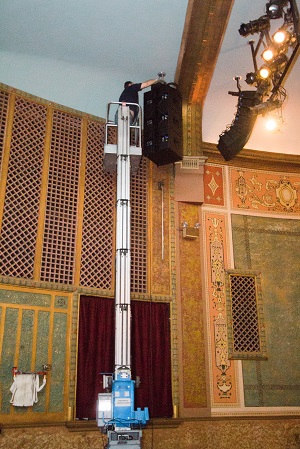 In 2019, after a two-and-a-half-year "Sound + Hearing Campaign," we successfully installed a new state-of-the-art sound system and a Hearing Loop system, a life-changing solution for people with hearing loss.

Read a great article from Skagit Talk about the theatre’s history and future from January 27, 2020.

In 2021 during our 18-month closure due to the COVID pandemic we renovated our lobby, addressing needed improvements and additions to our restrooms, and HVAC in the lobby.