DR. NO - IN THEATRE EXPERIENCE 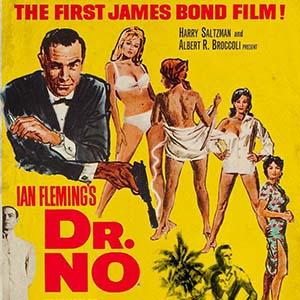 Sir Sean Connery has died. He was 90 years old. He became a star by creating the role of James Bond onscreen with his distinctive, much-imitated, Scottish brogue. We're remembering the life and work of Sean Connery by spotlighting two of his iconic performances on the big screen in DR. NO and GOLDFINGER.

In the film that launched the James Bond saga, Agent 007 battles mysterious Dr. No, a scientific genius bent on destroying the U.S. space program. As the countdown to disaster begins, Bond must go to Jamaica, where he encounters beautiful Honey Ryder, to confront a megalomaniacal villain in his massive island headquarters.

"Featuring plenty of the humor, action, and escapist thrills the series would become known for, Dr. No kicks off the Bond franchise in style." -- Certified Fresh, Rotten Tomatoes

Lincoln Theatre Members get $2 off on the following prices with discount code: