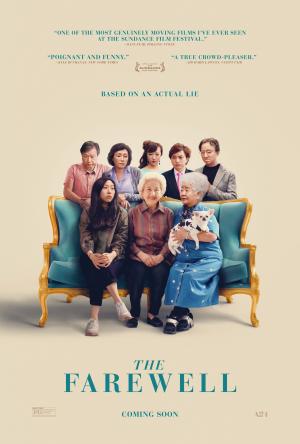 The film follows a Chinese family who, when they discover their beloved Grandmother has only a short while left to live, decides to keep her in the dark and schedule an impromptu wedding to gather before she passes. Billi, feeling like a fish out of water in her home country, struggles with the family's decision to hide the truth from her grandmother.

"This smart film deftly mixes comedy and tragedy, and manages to be heartfelt without being cloying or sentimental." - Adam Graham, Detroit News

“Lots of heavy stuff, to be sure, and there are times when The Farewell delivers powerful emotional blows, and we ache for Billi and what she's going through - in large part because Awkwafina's performance is so raw and authentic and in the moment." - Richard Roeper, Chicago Sun-Times