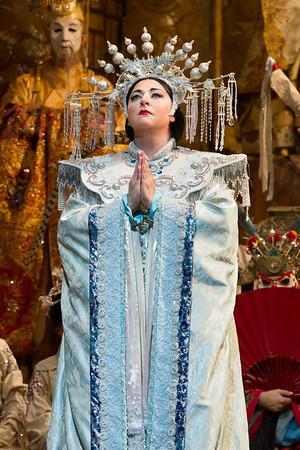 Azerbaijani tenor Yusif Eyvazov reprises Calàf, the role in which he made his Met debut in 2015. Eyvazov’s other Met performances include his role debut last season as Dick Johnson in Puccini’s La Fanciulla del West; Cavaradossi opposite his wife, Anna Netrebko, in Puccini’s Tosca; and the Met’s 50 Years at Lincoln Center Gala. This season at the Met, he also sings Hermann in Tchaikovsky’s The Queen of Spades and Cavaradossi and Calàf in the New Year’s Eve Gala. Recent past performances include Hermann and the title role of Verdi’s Don Carlo at Moscow’s Bolshoi Theatre, the title role of Giordano’s Andrea Chénier at the Vienna State Opera, and Don Alvaro in Verdi’s La Forza del Destino at the Royal Opera House, Covent Garden. Other roles this season include Maurizio in Cilea’s Adriana Lecouvreur in concert at Deutsche Oper Berlin and Manrico in Verdi’s Il Trovatore at the Vienna State Opera.

Stassya Pacheco returns for a pre-opera lecture prior to every Saturday live transmission, 30 minutes before the start time. Also, Saturday operas offer the option of pre-ordering your lunch from the Skagit Valley Food Co-op. Pre-order lunches are made up during the opera and ready for you to enjoy during the intermission.