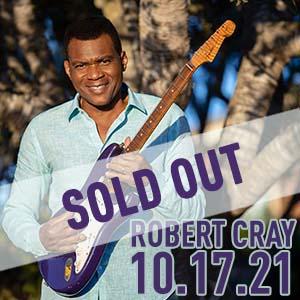 returns to the Lincoln on Sunday, October 17 at 7:30pm

The Lincoln Theatre is thrilled to welcome back Robert Cray after our 20 month COVID intermission for this special performance.

Robert Cray has been bridging the lines between blues, soul and R&B for the past four decades, with five Grammy wins and over 20 acclaimed albums! “In the early days of the band we were paying attention to my favorite blues players; Buddy Guy, Otis Rush, Albert King and especially Albert Collins,” Cray says.

With the 1986 release of Strong Persuader, the Robert Cray Band’s tunes were put in heavy rotation on mega rock stations across the nation. The first hit, “Smoking Gun,” was followed by “I Guess I Showed Her” & “Right Next Door (Because Of Me).”

Following the path of fame taken by blues-based rockers like Johnny Winter & Stevie Ray Vaughan, Cray became a sensation, leading his band in concerts at large arenas and rock festivals.

During the 90s the Robert Cray Band was featured in concert with artists like Eric Clapton, the Rolling Stones, John Lee Hooker, BB King and Bonnie Raitt, who declared that the bandleader (Cray) is “an original; he’s passionate, he’s a badass and puts on one of the best shows you’ll ever see.”