LIVE IN CONCERT: THE BLIND BOYS OF ALABAMA with Special Guest CHARLIE MUSSELWHITE 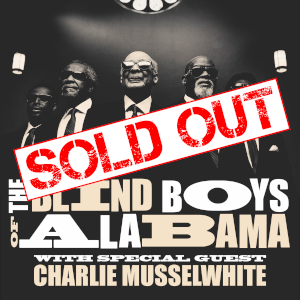 The Blind Boys of Alabama are recognized worldwide as living legends of gospel music. Celebrated by The National Endowment for the Arts and the Recording Academy with Lifetime Achievement Awards, inducted into the Gospel Music Hall of Fame, and winners of five Grammy Awards, they have attained the highest levels of achievement in a career that spans over 70 years.

The Blind Boys are known for crossing multiple musical boundaries with their remarkable interpretations of everything from traditional gospel favorites to contemporary spiritual material by songwriters such as Eric Clapton, Prince and Tom Waits. They have appeared on recordings with many artists, including Lou Reed, Peter Gabriel, Bonnie Raitt, Willie Nelson, Aaron Neville, Susan Tedeschi, Ben Harper, Patty Griffin and Taj Mahal.

Charlie Musselwhite’s journey through the blues was from his birth in Mississippi to Memphis, Chicago and California. Arriving in Chicago in the early sixties, he was just in time for the epochal blues revival. In 1966 at the age of 22 he recorded the landmark Stand Back! to rave reviews. A precipitous relocation to San Francisco in 1967, where his album was being played on underground radio, found him welcomed into the counterculture scene around the Fillmore West as an authentic purveyor of the real deal blues.

Fifty years of nonstop touring, performing and recording have reaped huge rewards. Charlie Musselwhite is living proof that great music only gets better with age. This man cut his (musical) teeth alongside Muddy Waters, Howling Wolf and everyone on the South side of Chicago in the early 1960s. Thank your lucky stars that he is still with us telling the truth with a voice and harp tone like no other.