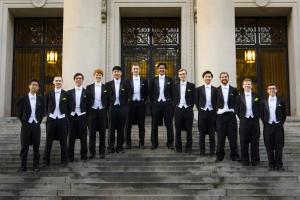 The Din and Tonics are Harvard’s signature a cappella group. Since 1979, they have entertained audiences around the world with their snappy arrangements and hilarious antics. This summer, the Dins are touring the world, visiting more than a dozen countries over a period of 10 weeks. The last performance of this tour takes place in the historic Lincoln Theatre. Join the Dins, including Mount Vernon High School Class of 2015 alum and Skagit native Michael Giles, for an evening of jazz standards and jazzy modern classics with an opening act by an ensemble from Mount Vernon High School students. Sponsored by Joseph D. Bowen, Attorney at Law (Harvard A.B., 1984).