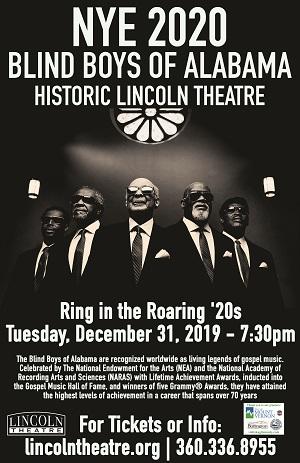 Ring in the Roaring '20s with the Blind Boys of Alabama on NYE at the Lincoln Theatre! We're ready to roar into the '20s, our Centennial Decade, and we are celebrating in full 1920's style this New Year's Eve with the Blind Boys of Alabama. The Blind Boys' live shows are roof-raising musical events that appeal to audiences of all cultures, as evidenced by an international itinerary that has taken them to virtually every continent. The Blind Boys of Alabama have attained the highest levels of achievement in a career that spans over 75 years and shows no signs of diminishing. So strap on your spats, dress as your favorite flapper, and high-step it downtown where we're bringing it back to the 1920s to ring in the year with nostalgia and excitement for our Centennial Decade! Forget about Prohibition – Champagne will be bubbling and music will be swinging at the best speakeasy in Skagit County!

The Blind Boys of Alabama have the rare distinction of being recognized around the world as both living legends and modern-day innovators.  They are not just gospel singers borrowing from old traditions; the group helped to define those traditions in 20th century and almost single-handedly created a new gospel sound for the 21st.  Since the original members first sang together as kids at the Alabama Institute for the Negro Blind in the late 1930s (including Jimmy Carter, who leads the group today), the band has persevered through seven decades to become one of the most recognized and decorated roots music groups in the world.

Touring throughout the South during the Jim Crow era of the 1940s and 1950s, the Blind Boys flourished thanks to their unique sound, which blended the close harmonies of early jubilee gospel with the more fervent improvisations of hard gospel. In the early 1960s, the band sang at benefits for Dr. Martin Luther King, Jr., and were a part of the soundtrack to the Civil Rights movement. But as the years passed, gospel fans started to drift away and follow the many singers who had originated in the church but were now recording secular popular music. And the Blind Boys, who refused many offers to ‘cross over’ to secular music, also saw their audiences dwindle. However, the Blind Boys persevered and their time came again, starting in the 1980s with their starring role in the Obie Award-winning musical “The Gospel at Colonus,” which began a new chapter in their incredible history. It’s almost unbelievable that a group of blind, African-American singers, who started out touring during a time of whites-only bathrooms, restaurants and hotels, went on to win five Grammy® Awards, a Lifetime Achievement Grammy, be inducted into the Gospel Music Hall of Fame, and to perform at the White House for three different presidents.

2019 brings them back together with Marc Cohn and producer John Leventhal for Work To Do, a unique collection that combines the songwriting talents of Marc Cohn with the soul-stirring harmonies of the Blind Boys which falls on the heels of more than a year of live collaborative dates. Work To Do is comprised of three studio tracks by Cohn and the Blind Boys (two originals, including the title track, and a version of the gospel standard “Walk In Jerusalem”) plus seven intimate live performances recorded at the Katharine Hepburn Cultural Arts Center in Old Saybrook, CT, during a taping of the PBS series The Kate. Original plans were to release an EP containing the studio tracks, but the excitement and magic captured during the taping inspired the decision to create this unique hybrid album.

Since they released their debut single, "I Can See Everybody’s Mother But Mine," on the iconic Veejay label in 1948, the Blind Boys have been hailed as "gospel titans" by Rolling Stone and have collaborated with everyone from Stevie Wonder to Prince and Lou Reed, and performed on some of the world's most prestigious stages. The New York Times said that they "came to epitomize what is known as jubilee singing, a livelier breed of gospel music," adding that "they made it zestier still by adding jazz and blues idioms and turning up the volume, creating a sound…like the rock 'n' roll that grew out of it." The New Yorker simply called them "legendary."

We'll drop the New Year's Eve Ball East Coast Time. A glass of Champagne or Sparkling Cider and Party Favors included in your ticket price. We'll keep you posted about the best after parties and lodging. The Hampton Inn is offering a special Lincoln Guest Rate by clicking here!  Skagit River Brewery is staying open late that night just for us with specials for ticket holders.