FILM: THE BANSHEES OF INISHERIN 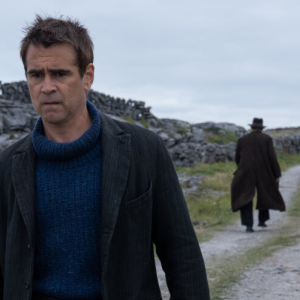 Set on a remote island off the west coast of Ireland, The Banshees of Inisherin follows lifelong friends Pádraic (Colin Farrell) and Colm (Brendan Gleeson), who find themselves at an impasse when Colm unexpectedly puts an end to their friendship.

A stunned Pádraic, aided by his sister Siobhán and troubled young islander Dominic, endeavors to repair the relationship, refusing to take no for an answer.

But Pádraic's repeated efforts only strengthen his former friend’s resolve, and when Colm delivers a desperate ultimatum, events swiftly escalate with horrific consequences.

Written and directed by Martin McDonagh (In Bruge and Three Billboards Outside Ebbing, Missouri).

"It's a gut punch of a comic-drama that keeps finding new ways to land hard-hitting body blows, and it's easily one of the year's very best films." —Adam Graham, Detroit News

SUNDAY 2:00 SHOW IS OPEN CAPTION (subtitles will be present on-screen throughout the film)