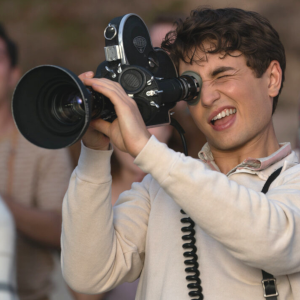 In the latest from director Steven Spielberg, young Sammy Fabelman (Gabriel LaBelle) falls in love with movies after his parents take him to see The Greatest Show on Earth.

Armed with a camera, Sammy starts to make his own films at home, much to the delight of his supportive mother (Michelle Williams).

When Sammy discovers a shattering family secret, he explores how the power of films can help him see the truth.

Co-written with Tony Kushner and inspired by Spielberg's own adolescence.

"Looking back with adult eyes, Spielberg sees his parents with all their flaws, yet infuses the film with warmth, understanding and love." —Caryn James, BBC

"Steven Spielberg’s 33rd feature film is a marvel coming-of-age story and one of his most personal." —Adam Mullins-Khatib, Chicago Reader