FILM: SEE HOW THEY RUN 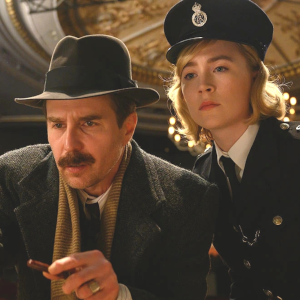 In the West End, plans for a movie version of Agatha Christie's smash hit play The Mousetrap come to an abrupt halt after a pivotal member of the crew is murdered.

When world-weary Inspector Stoppard (Rockwell) and eager rookie Constable Stalker (Ronan) take on the case, they find themselves thrown into a puzzling whodunit within the glamorously sordid theater underground, investigating the mysterious homicide -- at their own peril.

"A whizzy fairground ride in theatreland, powered entirely by the thought of a literary icon spinning in her grave." —Tim Robey, Daily Telegraph

"See How They Run is the whodunnit-as-hoot, with lots of laughs, oodles of style, and played with verve by a quality cast. It also reconfirms Saoirse Ronan as a comedy god." —Ian Freer, Empire Magazine