BE NATURAL: The Untold Story of Alice Guy-Blaché 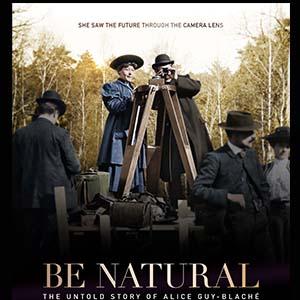 When Alice Guy-Blaché completed her first film in 1896 Paris, she was not only the first female filmmaker, but one of the first directors ever to make a narrative film. Be Natural: The Untold Story of Alice Guy-Blaché follows her rise from Gaumont secretary to her appointment as head of production a year later, and her subsequent illustrious 20-year career in France and in the United States, as the founder of her own studio and as writer, director, and/or producer of 1,000 films—after which she was veritably erased from history. Until now….

“When Pamela Green first talked to me about Alice Guy Blaché I thought, ‘how is it possible that I’ve never heard of her?’ One of the great pioneers of our industry who created films alongside the Lumière Brothers, Léon Gaumont, Georges Méliès… As fas as we know, she is the first female film director, possibly one of the first narrative filmmakers EVER. A writer, producer, studio head, with a 1000 films under her belt…The facts in this documentary blew my mind. It’s an honour to voice this story. May Alice’s story finally set the record straight and restore her place in cinema history.”- Jodie Foster, Actress, Director, Producer