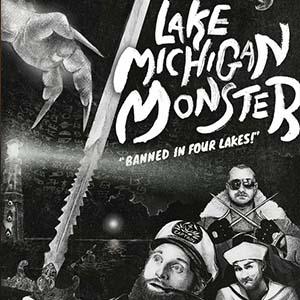 ONE DAY SCREENING ONLY - JULY 31

Forget about the Yeti, the Chupacabra or the Loch Ness Monster! Tremble! Be fearful! You are about to come face to face with the most mysterious, the most dangerous, the most deadliest of all: LAKE MICHIGAN MONSTER! Somewhere in Milwaukee, eccentric Captain Seafield (Ryland Brickson Cole Tews) assembles the “team of the century”, a group of maritime (sort of) specialists, to help him locate the sea monster that killed his father, and annihilate it. It’ll take a couple (a lot) of attempts, but the captain is determined to get his revenge.

What if SpongeBob had been directed by Canadian experimental master Guy Maddin? The answer lies with director Ryland Brickson Cole Tews and his microbudget creature feature. Made with great inventiveness and a love for ’50s B-movies and monster flicks, LAKE MICHIGAN MONSTER is everything indie cinema should be and more. With a gritty black-and-white photography, special effects galore, hand-crafted sets and costumes, and hallucinatory scenes, Tews pulls off a debut feature that’s as DYI as it is entertaining. The fun! LAKE MICHIGAN MONSTER is full of it! So … what do you say? Are you ready, kids?

"Grab a bottle of rum (or two), gather together some of your idiot friends, cast off your high-brow cinematic pretensions, and cue up this 78 minutes of nonsensical nautical mayhem." – Joshua Speiser, Film Threat

“The entire budget would barely pay for one of Captain America’s boots, but that doesn’t stop the Milwaukee-made horror comedy Lake Michigan Monster from delivering more crazy and clever visual tricks than the last 10 Marvel superhero blockbusters put together.” - Detroit Free Press

$10 for a 24 hour rental period on July 31 only. 50% of your ticket purchase directly supports the Lincoln Theatre, while the remainder support independent filmmaking & distribution.