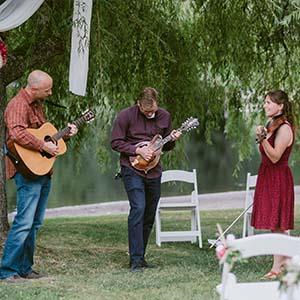 "Started with a fiddle and a guitar..."

Go the lyrics heard in the "Whiskey River Mudflats Anthem" sung by vocalist/guitarist Jason Morgan; this very-literal line harkens back to the early days of the three-piece Folk/Americana outfit.

Formed by Morgan and vocalist/fiddler Sarah Wheatley on the banks of the Samish River in Bow, WA, the Whiskey River Mudflats was created over a shared love of traditional American folk music and good times.

Practices down by the river, under the sunshine (or rain, it is the Pacific Northwest after all), are where the duo honed their sound known for blending smooth instrumentation with powerful vocal harmonies.

After a few months of jamming but drinking more than a few Vitamin R's, the band met vocalist/mandolinist Kenny Clarkson to round out the trio. Clarkson wasn't as familiar to the Folk/Americana genre as the other two, but had a penchant for learning fiddle tunes and wanted to develop further on the mandolin.

And then the lineup was set. After ironing out a robust set of covers, the Whiskey River Mudflats began to write original material varying in genre and sound. At one of their live shows you can expect to hear anything from a traditional fiddle tune to a moving John Prine cover and new and inviting original songs in between.