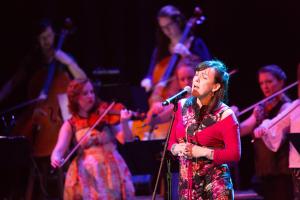 From humble dance halls to feature performances at The Smithsonian Institute in Washington, D.C., before world music audiences in Sweden and public radio audiences throughout the United States, Childsplay has introduced many thousands to the delights of traditional Irish, French-Canadian, Cape Breton, Bluegrass, Appalachian, and Scandinavian fiddle music, as well as jazz, swing, and classical music. The level of musicianship in Childsplay is unsurpassed, with players ranging from members of the Boston Symphony to the leading virtuosos of these various fiddle traditions.

When playing together, Childsplay creates sounds that are vibrant, powerful, and eclectic . . . playful, innovative and driving, taking fiddle music beyond mesmerizing repetition into the realm of harmonies and counter rhythms— traditional fiddle sounds in the contemporary world. With a repertoire that ranges from the lilting beauty of Celtic jigs and airs to the driving rhythms of hoe-downs  from the mountains of the southern United States to the smoky improvisations of jazz to new music written by a member of the group, a Childsplay concert will delight its listeners and show how versatility, virtuosity, and exuberance are indeed “childsplay,” something done competently and without effort.

Tying together these far-ranging stylists are their instruments; each member of the string section plays a violin or viola made by band member Bob Childs. In his workshop in Cambridge, Massachusetts, Bob produces instruments with a deep, sweet, and dark sound, whose quality has captured the interest of leading string performers throughout the United States and beyond.