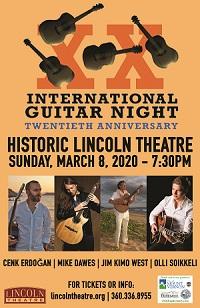 Each year, International Guitar Night’s founder Brian Gore invites a new cast of guitar luminaries from around the world for special concert tours of North America highlighting the diversity of the acoustic guitar.

We are proud to celebrate the 20th year of touring the U.S. For their special Anniversary Tour, Brian Gore has put together his most eclectic lineup yet: Guest host Mike Dawes (England) and his incredible two-hand contemporary style is joined by fretless guitarist from Turkey Cenk Erdoğan; electrifying jazz virtuoso Olli Soikkeli from Finland and Hawaiian Slack Key master Jim Kimo West. 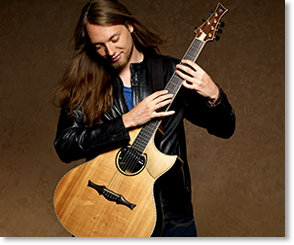 Mike Dawes is an English guitar player known for composing, arranging and performing multiple parts simultaneously on one instrument using unique extended and micro-techniques. He is hailed as one of the world’s finest and most creative modern fingerstyle guitar performers.

His debut record with CandyRat Records gained strong critical acclaim and spawned a variety world tours and singles, notably a viral virtuoso arrangement of “Somebody That I Used to Know” by Gotye. The lead single on Dawes’ second release ERA, an arrangement of “One” by Metallica, went viral with over 30 million hits in its first week of release.

Dawes is also lead guitar player for Justin Hayward of the Moody Blues featuring heavily on multiple DVD and PBS releases, notably “Spirits…Live” which debuted at #2 on the US Billboard chart.

Mike Dawes has amassed around 80 million music video views online. He was voted the ‘Best Acoustic Guitarist in the World’ by MusicRadar & Total Guitar Magazine in a December 2017 readers poll. 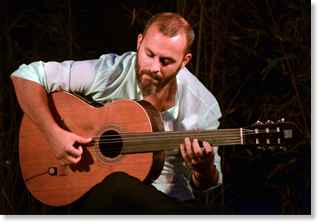 Cenk Erdoğan was born in Istanbul in 1979. In 1997 he won a four-year scholarship at Istanbul Bilgi University in the Music (Composition) Department. In 2001 he graduated with First Class Honors.

In October 2004, at the invitation of David “FUZE” Fiuczynski, he held a workshop at the Berklee College of Music in Boston MA on fretless guitar and modes in Turkish music. In 2008 Cenk recorded his first album “WITH”, which was produced by Sinan Sakizli for Baykus Music. The same year, with the “Aria” soundtrack company, he composed and arranged the soundtrack for the movie “Issiz Adam”, which was written and directed by Çagan Irmak, and won the Yesilçam “Soundtrack of the Year 2009” prize.

In 2009 the Cenk Erdogan Trio featuring Tineke Postma played in the 16th Istanbul Jazz Festival and 19th Akbank Jazz Festival. Cenk also played with the Yinon Muallem ensemble in the “Karawane 2009” festival, organized in Bochum. Cenk recorded the album “The Chark” in 2009 with his Trio, including Nihan Devecioglu and Adam Matta, and performed at the Zaltsburg Music Fest, Bayreuth Young Artists Fest, and Bonn Summer Fest.

In 2014 Cenk made the first educational website for fretless guitar playing, and started to teach the techniques of the Turkish way of playing fretless guitar. In 2014 Cenk also released his last record “KaraKutu,” on which he played solo with all acoustic guitars (fretless and fretted).

In 2016 Cenk conducted and arranged for the Orchestra of “Sezen Aksu,” which is the diva of Turkish popular music. His composition “Sezenli Yillar” has been performed at 6 concerts with a 35 piece orchestra and visual and dance shows. Cenk still works as a producer, composer and arranger for television and gives concerts as a solo guitarist and with the Cenk Erdogan Trio. 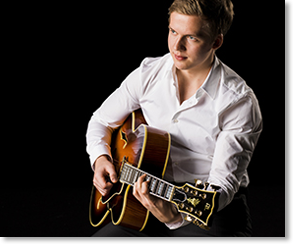 Olli Soikkeli was born in Nurmes, Finland in 1991. Now based in New York City. He started playing guitar at age of 12. After a few years of playing Olli was introduced to the music of great Django Reinhardt and Gypsy Jazz has been Ollis’ main focus ever since. Soon Olli was playing in jazz clubs and festivals all around Finland. After touring all around Europe with musicians such as Paulus Schäfer and Arnoud Van Den Berg Olli decided to move to New York City in 2014. Olli has played legendary venues such as Birdland Jazz Club, Blue Note and the Lincoln Center.

In 2011 Olli recorded his first album “Trois Générations” with Hot Club de Finlande and Vitali Imereli and in 2012 he recorded his second album “Kouvola Junction” with Paulus Schäfer and Arnoud van den Berg.

The Wall Street Journal wrote: “Olli Soikkeli, a riveting Finnish guitarist who combines astonishing dexterity and speed with pure soul in a way that places him among the worthiest current day successors to the legacy of the great Django.” 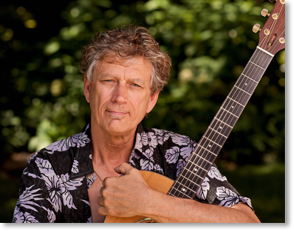 Having never even seen Waikiki, Jim “Kimo” West came right to Hana, Maui in 1985 and spent much of his time there for many years. It was in Hana where he first heard the music of Gabby Pahinui, Sons Of Hawaii, Sonny Chillingworth and Atta Isaacs. Already familiar with alternate tunings, the sound of ki ho’alu became his favorite “soundtrack”. Best known as long-time guitarist for the world’s most successful musical comedy artist, “Weird Al” Yankovic, Kimo is regarded as one of the world’s foremost “ki ho’alu” or Hawaiian “slack key” guitar artists and his music has garnered many millions of streams on Spotify and Pandora. This warm and engaging fingerpicked guitar style has it’s roots in 1840’s Hawaii, when Mexican vaqueros first brought guitars to the Big Island of Hawaii. If you saw the Oscar-winning film, “The Decendants” you have experienced this great acoustic guitar tradition.

Kimo is a 2008 winner of the Hawaii Music Awards and three- time Na Hoku Hanohano (the Hawaiian ‘Grammy’) nominee. He is also a two-time winner of the LA Treasures Award for his efforts in keeping this important acoustic guitar tradition alive. For his work with “Weird Al”, he has earned four Grammy’s and a Billboard #1 CD debut for 2015’s “Mandatory Fun”. He is a veteran of Hawaii’s famed slack key festivals as well as the So Cal Slack Key Festival every year from 2008 through 2018. He has shared the stage with almost all the world’s top slack key players at one time or another. His numerous CD’s feature many original compositions as well as inventive arrangements of the genre’s classic repertoire. His recent release, “Guitar Stories” goes beyond slack key, exploring other genres like West African guitar, Middle Eastern

“Slackers In Paradise” features duets with slack and steel guitar legend, Ken Emerson and his latest CD, “Moku Maluhia-Peaceful Island” is a mix of “nahenahe” or very relaxing compositions.

Kimo has also worked as a composer for film and TV for many years and maintains a sophisticated private studio in Los Angeles. He has composed music for features films, network TV shows and specials and cable shows. His slack key compositions have been used in a number of features, TV spots, cable, web and in many documentaries.