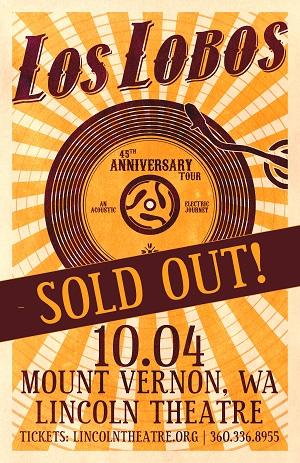 Los Lobos is embarking on their tour celebrating 45 years of high-quality American music - thank you to all of our fans who have supported us and continue to turn out! These shows feature an acoustic set followed by an electric set that covers music from the last 5 decades.

“We’re a Mexican American band, and no word describes America like "immigrant". Most of us are children of immigrants, so it’s perhaps natural that the songs we create celebrate America in this way.” So says Louie Perez, the “poet laureate” and primary wordsmith of Los Lobos.

Back in 2003, when Los Lobos was celebrating the 30th Anniversary of their humble beginnings as a garage band in East L.A., Rolling Stone summed up their distinctive, diverse, freewheeling fusion of rock, blues, soul and Mexican folk music: “This is what happens when five guys create a magical sound, then stick together…to see how far it can take them.” Originally called Los Lobos del Este (de Los Angeles), a play on a popular norteno band called Los Lobos del Norte, the group originally came together from three separate units. Lead vocalist/guitarist Hidalgo, whose arsenal includes accordion, percussion, bass, keyboards, melodic, drums, violin, and banjo, met Perez at Garfield High in East LA and started a garage band. Rosas, who had his own group, and Lozano launched a power trio. “But we all hung out because we were friends and making music was just the natural progression of things,” says Perez, the band’s drummer. “Like if you hang around a barbershop long enough, you’re going to get a haircut.”

Perez, once called their powerhouse mix of rock, Tex-Mex, country, folk, R&B, blues and traditional Spanish and Mexican music “the soundtrack of the barrio.” Three decades, two more Grammys, the global success of “La Bamba” and thousands of rollicking performances across the globe later, Los Lobos is surviving quite well -- and still jamming with the same raw intensity as they had when they began in that garage in 1973.