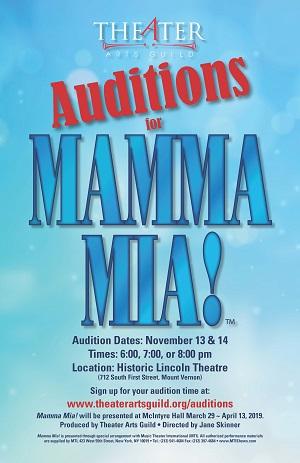 Mamma Mia! is a musical based around the music from the band ABBA. It premiered in London on April 6, 1999. We will have a performance on the 20 year anniversary! The show has continued to play to full houses around the world to this day. The setting is a small Greek island where we meet Sophie, who is engaged to Sky, and is searching for her father so he can walk her down the aisle. After looking through her mother’s diary from the year she was conceived she discovers three possibilities: Sam Carmichael, Harry Bright, or Bill Austin. She sends invitations to all of them (without telling them they might be her father). Sophie’s two best friends (Ali and Lisa) arrive on the island the day before the wedding, as well as the three father possibilities. Other guests arrive (ensemble), including Sophie’s Mom’s (Donna) two best friends (Tanya and Rosie) who were all in a band called the Dynamo’s when they were in their 20’s. They have much fun remembering the good old days, singing together again. All three father possibilities find out why they are there and all three would love to be the one to ‘give Sophie away’. Sky and his friends have a stag party and Sophie and her friends have a bachelorette party (these include singing and dancing). There is a flirtation between Tanya and Pepper as well as between Rosie and Bill.  Harry lets Donna know he is now in a committed relationship with a man. At the last minute, Sophie and Sky decide not to get married and instead decide to go explore the world together. Sam proposes to Donna (who accepts) and since the priest is right there, they get married! The production includes 25 ABBA songs! The entire ensemble is included in many of them.

1. Sign up for your audition time by emailing Jane Skinner (director) at bandjskinner@comcast.net

3. Each hour’s participants will learn a short dance routine together and then take turns presenting a song and a monologue.

4. Please choose a song that shows off your vocal range. We would prefer if it was not a song from the show or opera. We will provide a piano accompanist, or a CD player, or a Bluetooth® speaker so you can use karaoke backup from your phone. Please do not sing over an artist. We prefer you have some type of accompaniment rather than acapella.

5. In finding a monologue, look for something you can express emotions with. It’s encouraged to find ways to use your body as well as your voice in conveying what the monologue is about.

6. If you are asked for a callback audition, it does not mean you are cast in the show; and if you do not get called back, it doesn’t mean you will not be cast.