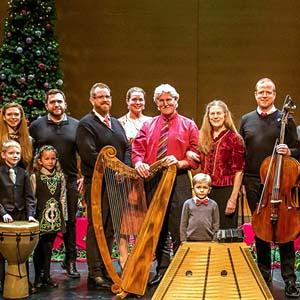 Celtic Yuletide is coming back to the live stage, bringing generations together for a joyful celebration as the Boulding family and special guests weave their magic with lively and soulful music, storytelling and stellar Irish step-dancing. Philip and Pam’s Celtic harps, dulcimers, concertina, accordion and more are accompanied by their grown children on violin, cello, whistles, harmonium and harp. Grandson Haydn brings down the house with his dancing, percussion and sidekick act to his father’s juggling. We’re pleased that fiddler and piper Vienna Scheyer​ will join the band for the first time, along with our favorite Dublin guitarist/singer Colm McCarthaigh. Dynamic percussionist Matt Jerrell and the award-winning Tara Academy of Irish Dance return again this year adding their brilliance in rhythm and dance.  Become part of the Yuletide family for this 43rd annual gala to experience joy and warmth in the dark of winter.

Feel the magic and kindle the light of Yuletide!

Philip and Pam Boulding founded Magical Strings in 1978, the same year they began the Celtic Yuletide Concerts with their family. They have performed throughout the U.S., Canada, Ireland and Japan, toured and recorded with Dan Fogelberg, appeared on Garrison Keillor’s “A Prairie Home Companion,” and recorded 21 albums on four labels. Once called the “Von Trapps of the Northwest” by local media, their love of music is embraced by their five grown children and six grandchildren, most of whom return each year to join the family band for the Yuletide Concerts.

Magical Strings' newest CD release, Fairy Wind captures the exuberant spirit of Philip and Pam’s journeys to Ireland and beyond, with 15 sparkling tracks recorded at Big Red Studio, featuring their newest compositions including “The Hermit’s Cave” and “Tigh Eamon” along with many surprises.  CDs will be available at all the concerts.