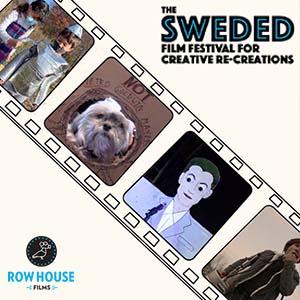 Short, Cheap & Out of Control: ‘The Sweded Film Festival for Creative Re-Creations’ Lets Movie Fans Produce Their Own Versions of Favorite Flicks

Join us for the only festival of classic movies, re-made by amateurs who replace A-list stars and CGI with whatever is laying around their houses and a ton of creativity. It’s odd, unexpected, and a whole lot of fun.

THE FESTIVAL INCLUDES A SWEDED REMAKE OF 'START MAKING SENSE' FROM THE LINCOLN THEATRE'S STAFF!

It’s time for movie lovers to take matters into their own hands: With many movie theaters still closed and few new releases, Rowhouse Online is introducing The Sweded Film Festival for Creative Re-Creations, a feature-length compilation of homegrown “Sweded” films will premiere February 12 in virtual cinemas and, where possible, select cinemas nationwide.  Whether they act like Lawrence of Arabia in a sandbox, spit up some split-pea soup from their own bedrooms, or make Peter Pan fly using kitchen utensils, first-time filmmakers and pros alike can make a “Sweded” film and have moviegoers nationwide marvel at their ingenuity and pure, raw humor.

“Sweded” films have nothing to do with Sweden and everything to do with Michel Gondry’s 2008 film Be Kind, Rewind, in which video store employees ruin an entire store’s worth of videos and cover their mistake by making hilarious and bizarre short remakes of the actual films. That’s the inspiration for The Sweded Film Festival for Creative Re-Creations.

“Movie lovers have spent all spring and summer watching and re-watching their favorite movies and yearning for a creative outlet, so 2020 is the perfect year to bring Sweded films to a national audience” said Brian Mendelssohn, owner of Pittsburgh’s Row House Cinema, where the idea for The Sweded Film Festival for Creative Re-Creations began. “We’re all feeling off-kilter and weird these days, and that’s what Sweded films are all about. We can’t wait to see what film fans across the country have to show us – let’s seem ’em short, cheap and out of control!”

100% of your ticket purchase directly supports independent theaters and filmmaking. Thank You!

Virtual Tickets: $3.99. 50% of the proceeds support the Lincoln Theatre! Renting a virtual film through the Lincoln is a great opportunity for patrons to show their support for us during quarantine. Many of the virtural films are available to send as gifts.