John McEuen & the String Wizards present: Will the Circle be Unbroken 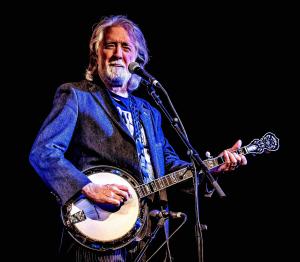 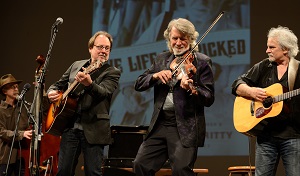 Points of Interest (in no particular order.)

A Nitty Gritty Dirt Band founding member (1966); in 2015 they were inducted in to the Colorado Music Hall of Fame.  October of 2017, at the conclusion of their 50th year tour, due to growing demand John left the band to pursue his own tour dates and projects.

The Life I’ve Picked on Chicago Review Press was been #1 on Amazon’s country book charts for its first 5 weeks, and is in its 2nd printing with ALL 5 star reviews.

Made in Brooklyn - Produced by John , with 6 original cuts and gems from his roots of music features David Bromberg, John Cowan, Matt Cartsonis, John Carter Cash, Steve Martin, Andy Goessling, David Amram, Martha Redbone, and Jay Ungar. Made in Brooklyn on Chesky Records (Sept./2016) was honored with Stereophile Magazine’s Record of the Month! March of 2018 it was noted as Best Americana Album by the Independent Music Awards.

John McEuen’s Acoustic Traveller show – The Sirius/XM radio show – is now in its 9th year.  On The Bridge, it runs 6 times a month, also available on demand.

John was recently inducted in to the American Banjo Museum Hall of Fame!

In 2010 John was honored with The Best of the West Performer Award, as a solo artist, presented by the Folk Alliance.

The Allman Brothers Band released Live at the Beacon Theater, featuring John as special guest in 2013.

2013 John received the Charlie Poole Lifetime Achievement Award. McEuen has also been presented with the Uncle Dave Macon Award for excellence in and pursuit of preserving historic music.

In 1977 the Nitty Gritty Dirt Band became the first American band to tour the Soviet Union – 28 sold out shows in May – the tour included a television broadcast reaching 130 million people. They are featured in 2017’s Free to Rock documentary about how American Music brought down the Iron Curtain

The Music of the Wild West CD– Produced by John, was honored with the Western Heritage Award. It is “the Will the Circle Be Unbroken of 1890.” (McEuen has scored 13 film projects, and Emmy nominated mini-series The Wild West for Warner Bros.,)

Produced and directed (also on Varese/Sarabande) the live music documentary The Dillards – A Night In the Ozarks, capturing his early mentors at their best.

He has continually performed - over 9,500 shows - and traveled 3 million+ miles to do it …  performed on over 300 television shows, both with the band and solo, as well as producing shows for television.

John is the only California musician to perform solo on the Grand Ole Opry, also play it several times with his band NGDB, and be a featured guest “sittin’ in” with several of the Opry member acts.

2009 McEuen joins SyndicatedNews.Net as CEO– an entertainment, broad news outlet. He features interviews with celebrities as well world news covered in a different manner than others. Original content by many contributors from judges to health experts to music reviewers are part of this growing site.

John has made over 40 albums (6 solo) that have earned 4 platinum and 5 gold recognitions, Grammy, CMA and ACM awards, Emmy nomination, IBMA record of the year award, and performed on another 25 albums as guest artist.

"I went to see Nitty Gritty Dirt Band in college at Gallagher Arena. A bunch of guys in the dorm pooled our monies together and threw in an extra buck a piece to pay one of the guys to sleep out for tickets.. we got front row. We were having the time of our lives when during a fiddle solo, John McEuen leaped over the monitors and past the edge of the stage and landed in between John Mathiason and me. McEuen never missed a lick of that solo. THAT MOMENT is forever etched in my soul…" - Garth Brooks 2014