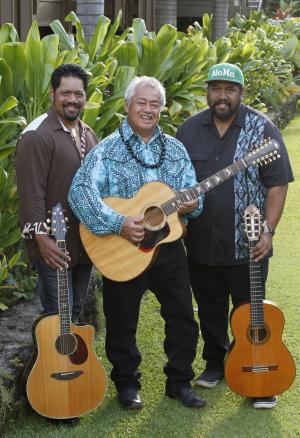 “Virtuosic keepers of a cultural flame…Bringing folklore & cultural memory into a performance that unfolded as breezy entertainment.” --The New York Times

“Kahumoku was an affable raconteur, mixing his dialogue with passionate renderings of material.” --LA Times

“Nathan… on electric bass and acoustic guitar, shows an... advanced understanding of harmony and orchestration …his singing style is effortless" –New York Times

A talented multi-instrumentalist, NATHAN AWEAU has been part of such award-winning groups as HAPA, Ka‘eo, and The Ali‘i. His seven solo CDs have won him multiple Na Hoku Awards, including Male Vocalist of the Year (the only person to have won 3 times), Song of the Year (twice), and Island Album of the Year, among others.

“Kahiapo’s …strength as a solo vocalist … who is also talented slack key guitarist. The songs … show him to be a guy with broad musical horizons.” --Honolulu Star-Advertiser