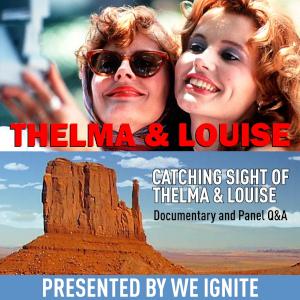 On May 14th and 15th Thelma & Louise and a companion documentary, Catching Sight of Thelma & Louise, will screen at the historic Lincoln Theatre, along with a panel discussion focused on bringing awareness to violence against women. Skagit Domestic Violence and Sexual Assault Services and related organizations will be featured on the panel.

In the spring of 1991, a different kind of film premiered around the country: Thelma & Louise. No one could deny the significant impact it left on audiences. Its legacy is still being discussed today, in the context of #MeToo, raising the question of whether women are any safer today than they were 30+ years ago.

When the movie came out, Jennifer Townsend, a Seattle viewer, conducted a survey about audience reactions to the film. Hundreds of respondents completed the survey, but the results weren’t published at that time. Twenty-five years later, Townsend revisited the survey and tracked down women and men who had responded. Their personal stories are captured in Catching Sight of Thelma & Louise, a documentary that dives off the edge into the truth of women’s experience in the world.

The film has screened to appreciative audiences across the country as well as in Europe and Asia. “I am astounded by the number of viewers who have contacted me to thank me for making the film,” said Townsend. “They continue to discuss it weeks afterward and say they feel connected with the intimate stories shared by the participants.”

On Saturday May 14th, the Lincoln Theatre will present Thelma & Louise at a 7:30 pm screening. On Sunday May 15 at 2:00 pm, the Lincoln Theatre will present the documentary, Catching Sight of Thelma & Louise. Townsend will be on hand for Q&A and discussion with the audience, featuring local agencies involved with providing services to people who are experiencing sexual assault and / or domestic violence and its aftereffects.

Co-organizer and local resident Kathy Reim says, “My family and I watched Jennifer’s documentary and knew we wanted to bring it to our community. I’m thrilled she will be with us to discuss her project and the importance of these conversations. This is a powerful film.”

The event is co-hosted by the Lincoln Theatre and the local organization WE Ignite, along with several generous sponsors. WE Ignite, founded in 2018, presents an annual Women’s Conference to provide opportunities for women to share their expertise, learn from each other, make lasting connections, gain knowledge, find inspiration, and magnify the vision for professional and personal lives.

Saturday, May 14, 7:30 pm: Screening of the 1991 film Thelma & Louise, the story of two best friends who set out on an adventure that turns into a flight from the law when Louise shoots and kills a man who tries to rape Thelma at a bar. Directed by Ridley Scott and starring Susan Sarandon and Geena Davis as the iconic duo.

Sunday, May 15, 2:00 pm: Free ($10 suggested donation) screening of the documentary Catching Sight of Thelma & Louise, an authentic and powerful portrait of fans and critics who saw the film in 1991 and documented their thoughts and feelings in intimate letters at that time. Twenty-five years later they were tracked down by the filmmaker. Through laughter and tears, they candidly share personal stories about their Thelma and Louise experiences and the meanings the film holds for them.

To donate via the Lincoln, click here and select "Thelma & Louise" under "Designate My Donation."

"A thoughtful, well-structured examination of a movie that has become a cultural touchstone." —Jennifer Merin, Alliance of Women Film Journalists

Sponsored by BrandQuery and HKP Architects.

Presented by WE Ignite.