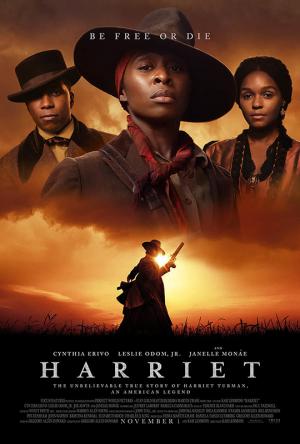 Based on the thrilling and inspirational life of an iconic American freedom fighter, HARRIET tells the extraordinary tale of Harriet Tubman's escape from slavery and transformation into one of America's greatest heroes. Her courage, ingenuity, and tenacity freed hundreds of slaves and changed the course of history.

"It is a rousing and powerful drama, respectful of both the historical record and the cravings of modern audiences." - A.O. Scott, New York Times

"A conventional but engaging biopic about a crucial American figure." - Rafer Guzman, Newsday

"Erivo is a standout in this modest, well-intentioned story of courage and inspiration, and is worthy of consideration when Oscar nominations are handed out." - James Beradinelli, ReelViews