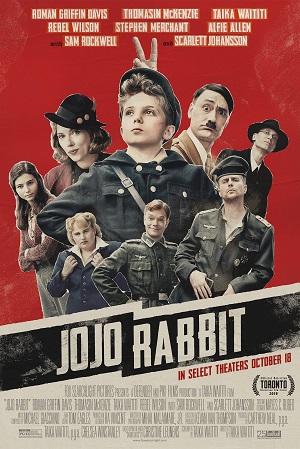 Writer-director Taika Waititi (THOR: RAGNAROK, HUNT FOR THE WILDERPEOPLE), brings his signature style of humor and pathos to his latest film, JOJO RABBIT, a World War II satire that follows a lonely German boy (Roman Griffin Davis as Jojo) whose world view is turned upside down when he discovers his single mother (Scarlett Johansson) is hiding a young Jewish girl (Thomasin McKenzie) in their attic. Aided only by his idiotic imaginary friend, Adolf Hitler (Taika Waititi), Jojo must confront his blind nationalism.

"Jojo Rabbit is bold in its inversion of expectations and its reimagining of a familiar subject. There's nothing trivial about it." - Paul Byrnes, Sydney Morning Herald

"Jojo Rabbit is lovely from start to finish. It is unflinching in its allegiance to joy and mirth, no matter how depraved and depressing human beings and their actions tend to be." - Oggs Cruz, Rappler

"Taika Waititi's film is tender, daring, and sharp -- precisely pitched so that it keeps its path steady and its ambitions in check." - Clarisse Loughrey