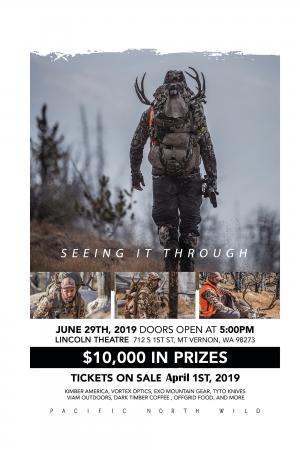 PNWild presents the premiere of Seeing It Through.

This is a film based around a lived mantra for PNWild as a whole. We charge into the mountains with a mindset to not be afraid of what is to come, to push past the boundaries of comfortability, and to not stop until what we set out for is accomplished. That is Seeing It Through.

This project materialized early in 2018, there were a few different ideas thrown around, but eventually we landed on a defined idea: to set out into the high country, and harvest four beautiful mule deer. There was no working title for the film leading into the hunt as we wanted the title and feel of the film to be organically grown. As we progressed through the hunt “Seeing It Through” became a slogan that we were constantly saying to one another and ourselves.

During hard climbs up steep mountains; “Lets see it through boys, keep pushing.”

When we knew our packs were all going to be extremely heavy for 7 miles… “No backing out now, we gotta see this through!”

Those words just continued to come up, over and over. They kept all of us locked in and aware of what it is we were there to accomplish. “Seeing it through” became a mindset for each of us. When that final deer hit the ground and again when we all set our packs down at the truck, and yes when we finished that final slice of delicious pizza, we knew we had accomplished our goal of “Seeing It Through.”

Arrive early for a social hour and product giveaways. ​Doors open at 5:00pm.